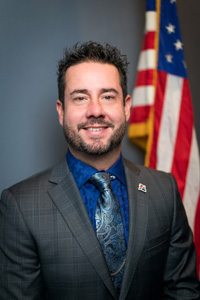 Councilman Kevin Naquin represents Lafayette Parish Council District 2, the seat to which he was elected in 2019. He has been employed by USMEDEQUIP as a Business Development Representative since February 2007. In this role, Councilman Naquin provides rentals, sales, and service of medical equipment to hospitals and long-term acute care facilities throughout six (6) states.

Councilman Naquin was a member of the fifth and sixth Lafayette City-Parish Councils. He was elected to the City-Parish District 1 seat in 2011 and served two (2) consecutive terms. During his City-Parish Council tenure, Councilman Naquin gained leadership experience by serving as Vice Chair and as Chair of the Council and by his formation of the LCG Future Needs/Funding Sources Committee. He is a member of Saints Peter & Paul Catholic Church and its Knights of Columbus, the Scott Business Association, and is a board member of the Cajun Golf Association. Councilman Naquin has been playing the accordion since the age of 14. He plays the accordion for his Cajun band, The Ossun Playboys and has won over 17 Cajun French Music Association awards over the past several years. In honor of his father, Jessie Naquin, Councilman Naquin established a foundation in 2012 and organized an inaugural pancreatic cancer golf tournament. Since 2012, over $130,000 has been raised, 100% of which funds pancreatic cancer research.

Councilman Naquin graduated from Acadiana High School and holds a bachelor’s degree in insurance and risk management from University of Louisiana at Lafayette. He enjoys Cajun music, playing golf, hunting, camping, and spending time with his wife, Christy, and their children, Kaleigh, Natalie, Baylen, Ridge, and Olivia.